It is with great pleasure we announce that on July the 4th 2019, a range of the MUSES of LIGHTs have been formally handed over to Vittorio Storaro in San Sebastian for Woody Allen’s 51st film shooting. 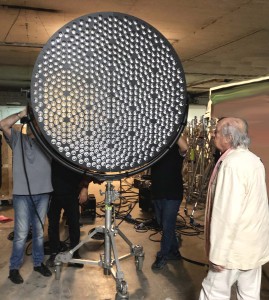 The MUSES of LIGHT are Innovative LED Lighting Products, based on LED technology, specifically targeting the film market and production requirements of any sort between interior and exterior and large scale venues.

Bases and foundation of the development is the Storaro and De Sisti co-operation.

The products combine the intuition, genius and Ideas of Vittorio Storaro and Francesca Storaro, with the technology and production skill of De Sisti.

The interesting complementarity of the development group is somewhat to respect. 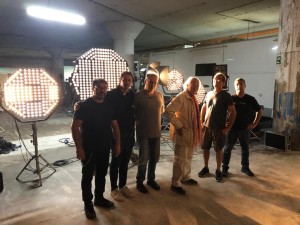 The internationally acclaimed Lighting Master in Cinematography and Graphic Arts Vittorio, with the added skill, preparation and sensibility introduced by his daughter Francesca Storaro, Lighting Designer for high profile projects in the Architectural and Events sector, provide a great deal of multidiscipline and clear target to follow to the development group at De Sisti.

This Series of LED Lighting is designed taking inspiration by the nine Muses who represent the Arts in ancient times, plus one named Aurea, that symbolizes the Cinema, the Contemporary Visual Art.
The shared idea was to create a new series of LED lights, based on the ten geometrical shapes, following the concept of analogy between Primary Elements and Geometric Forms, from One to All.

The MUSES of LIGHT, is a complete range of LED Lighting products that are: